To commemorate Freedom Day on 27 April 2019, Oliewenhuis Art Museum celebrates the work of Elza Botha that is currently on view as part of the exhibition Centennial, A Century of South African Art from the Sanlam Art Collection, 1918 – 2018 on display in the Main Building. The content of both artworks and the courage of the artist to produce these works during the height of apartheid make these artworks relevant celebrating the first democratic election on 27 April 1994. 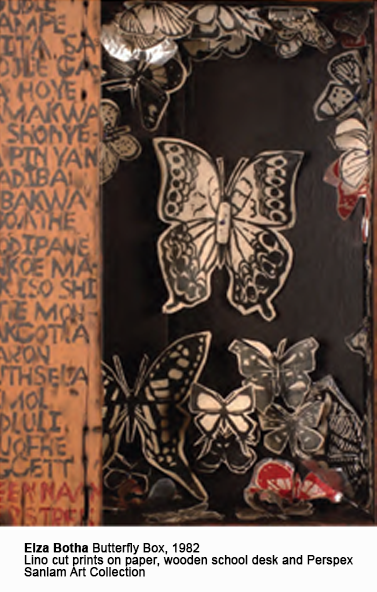 Botha’s thought provoking works, Butterfly Box and Manifes, were both produced in the early 1980s; a timeframe during which many South African artists resisted and questioned the political climate and provided social and political critique through their artworks.  Butterfly Box and Manifes make statements about the injustices of the former apartheid government by specifically focussing on how important information at that time was being withheld in the press by laws of censorship. The artist deliberately used art as a tool of communicating information that was ‘banned’ in order to educate and make information available to the broader public.

The Curator of the Sanlam Art Collection, Stefan Hundt, explains these artworks as follows:

‘Elza Botha’s Butterfly Box, …, presents the viewer with a wooden school desk transformed into a display box for captured butterflies. The left side of this box is inscribed with [a] list of names. Some of the names are distinctive – Madiba, Timol and Aggett. At the time this work was exhibited the names of persons who were banned, imprisoned for political crimes or under detention without trial, by law could not be published. “Madiba” – Nelson Mandela was still in prison and (Ahmed) Timol (1941 – 1971) and (Niel) Aggett (1953 – 1982), both purportedly committed suicide whilst under detention. 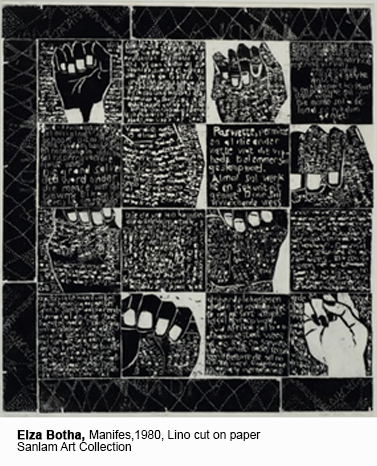 The last text at the bottom of the list states “GEEN NAAM VERSTREK” (no name provided) makes this list of names all the more ominous. Butterfly Box, directly confronted the art gallery visiting public with the names of the persons the state security aparatus [sic] had disposed of, silenced or kept behind bars. As at the time art wasn’t subject to the act banning orders and censorship the authorities were powerless to prevent the exhibition of this work by Botha. Similarly Botha’s Manifes, …employs the same strategy of making visible that which was meant to be hidden. In this instance the text of the ANC’s Freedom Charter. Further the text is in Afrikaans, a tactic employed by Botha to deliberately transcend the popularly held perception that Afrikaans could not become a language of struggle for a free and democratic South Africa.’ (Hundt 2018: 6).