The Common Dwarf Gecko (Lygodactyluscapensis) is a small greyish-brown lizard with specialised toes for gripping tree trunks and rocks. Adults have a body length of about 4–5 cm and the tail is about the same length. Unlike most other gecko species, these little creatures are active during the day and not at night, although they may remain out on walls even after dark on very warm summer nights. They are active throughout the year, even in Bloemfontein, but in winter they come out later and retire earlier.

These geckos occur naturally in large parts of southern and eastern Africa. In a new study by Alexander Rebelo and co-workers (including the author), published recently in the scientific journal Herpetology Notes(2019, volume 12, pages 643–650),the Common Dwarf Gecko was identified as the most successful invasive lizard species in South Africa. The study documents in detail the spread of this species from its natural habitat into areas in the south of the country where it had not previously occurred.

Until the early 1980s it was not recorded outside what is considered its normal range in South Africa, i.e. mainly savannah in KwaZulu-Natal and the northern provinces of the country, but including thornveld along the Free State and Northern Cape border to about as far south as Kimberley. However, from the 1980s, small populations became established in cities like Welkom, Bloemfontein, Port Elizabeth and Cape Town. Later on,these geckos were also reported from various towns, nature reserves and other built-up areas. By the mid-2010s the species had spread along most of the South African coastline and into several other areas in the interior, including some Karoo towns like Graaff-Reinet.

But how did these little geckos get to where they are now? The authors of the Herpetology Notes study suggest that humans have facilitated their translocation by transporting them, accidentally, from one urban area to another in motor vehicles. For example, geckos hiding in plants in garden centres (which provide excellent habitat) in the species’ natural range may get transported to plant parks or nurseries elsewhere beyond their natural range, and then end up in various suburban gardens when plants are purchased and taken home by unwary citizens. Also, eggs deposited in plants may hatch after the plants are moved into gardens, where the baby geckos then grow up. In other cases, geckos in places like Pretoria or Durban find their way into the parked motor vehicles or caravans of visitors. Once these visitors return home, the geckos escape and enter gardens, where they find a more than satisfactory home in rockeries, trees and on walls. Some of the introduced geckos may be gravid females which later lay their clutches of two eggs, thus ‘introducing’ even more individuals. And of course the more geckos, the more chances for mating and increasing the size of populations.

Even the cold winters of Bloemfontein do not stop them from proliferating as they are able to find shelter in a variety of places in and around homes.Once the sun has warmed up the rocks and walls in gardens, these geckos can be seen basking in the sun, sometimes in surprising numbers. Records of these geckos in Bloemfontein, collected mostly by the author, indicate that the first known local records were from the late 1980s, but today these geckos are to be found throughout the city, and in some areas they seem to be by far the most common lizard species. They are most often seen on walls with plants growing on or against them, but on occasion can also be seen in other places such as on window sills or tree trunks, and may even enter homes for short periods to escape the heat or for shelter at night.

The places where they are found in cities like Bloemfontein are often not inhabited by any other lizards, and so it seems that they are utilising an ‘open’ and ‘available’ niche. However, the impact of these little geckos on native populations of other local animal species has not been evaluated yet. There are already a few records indicating that they are spreading into areas of natural vegetation in the city.

Dr Bates and his colleague in the Herpetology Department, Dr Cora Stobie, are collecting records of these geckos and other reptiles and frogs found in Bloemfontein. If you see any, please take a photo and contact either of them at the National Museum (Tel. 051 4479609) or email herp@nasmus.co.za. 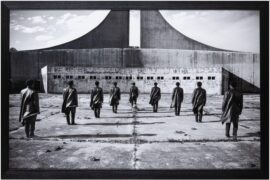 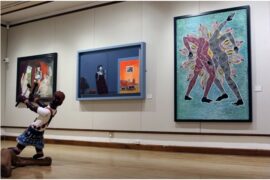