The ultimate aim of this curated exhibition was to showcase works with the intention to unpack a number of themes. These topics encompass satire, beauty, interior and exterior spaces, mysticism, rituals and traditions, hopeful views of vacations or places to escape in contrast with desolated spaces. With this in mind, herewith some notes on how the conceptual background of From Desolated Recollections to Anticipated Festivities was conceived.

A suitable theme for the ‘end of the year’ exhibition was a bit more complicated when reflecting on 2021. I was pondering on how the reality of the global pandemic, the Corona Virus infiltrated our homes, bodies, ways of living and thinking. As a result I decided to focus on how this possibly could impact on how we perform rituals, celebrate and gain energy from friends, family and the communities surrounding us.

Dominating themes in From Desolated Recollections to Anticipated Festivities are: Isolation or desolation, mysticism and rituals.

These topics were ignited by the insecurities that are fostered due to continuously changing lockdown levels, rumours about different strains of the Corona Virus, and approaching ‘waves’. This resulted in conspiracy theories, creating fear and a loss of trust in science and leadership. Regrettably our ‘new normal’ led to extreme poverty, an increase of gender based violence, isolation and a loss of hope for many people. We are at a crossroads, anxiously waiting for direction. 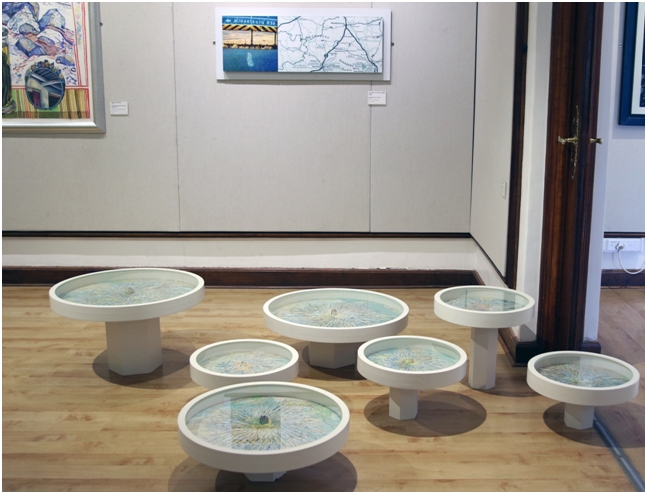 The artworks of Kobus Kloppers’s work, Weerskante van ‘n reis (2004) and Barbara Wildenboer’s installation, Deluge (2013-2014), are visual metaphors in the exhibition that relate to this turning point that is in question. Weerskante van ‘n reis (2004) presents the two exit points or roads to take, whilst Deluge’s circular shapes containing layers of hand- cut maps, create whirlpool shapes, each within a small origami Lotus Flower in the centre. This series is loosely based on Leonardo da Vinci’s Deluge drawings in which he studied water turbulence and fractal patterns within moving water masses. Isolation and desolation can relate to these works, as both present turbulent pathways, with very little or no direction. 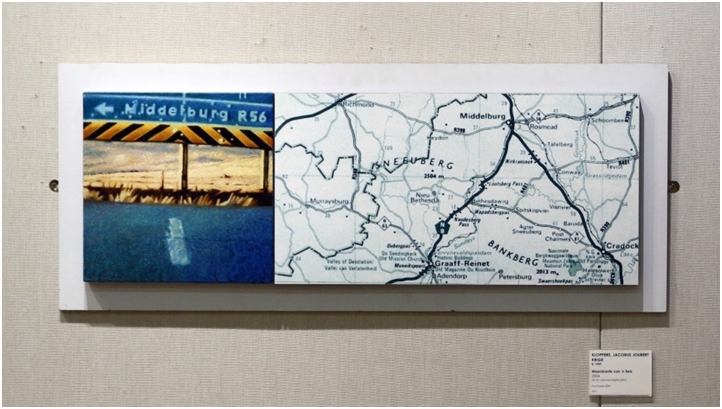 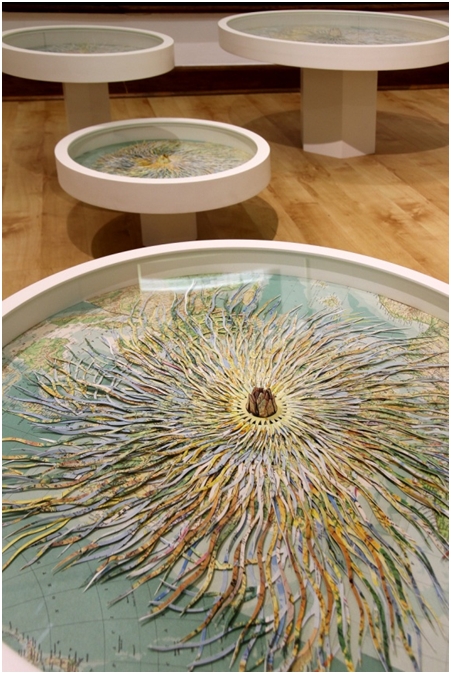 Artworks of Keith Alexander’s, Kolmanskop Daybreak (1986), Willem Blom’s, Deserted seafront (1986) and Roger Ballen’s, Bedroom in Bethulie (1984) and Bitten (2004) converse to the themes of isolation and desolation. These works emphasise unknown interior and exterior places. On the one hand, one might be longing for a route to a deserted seafront, or witnessing the sunrise in Kolmanskop. On the other hand these works might be perceived as desolated morbid places. This can demonstrate not only our physical isolation but also the visible decay and remoteness of small towns, often surrounded by arid landscapes, like Bethulie and Kolmanskop. 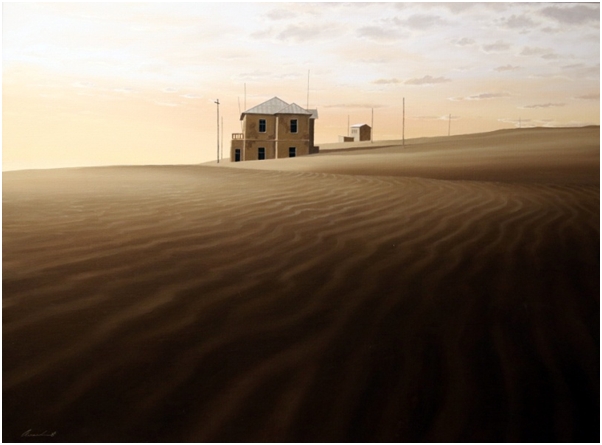 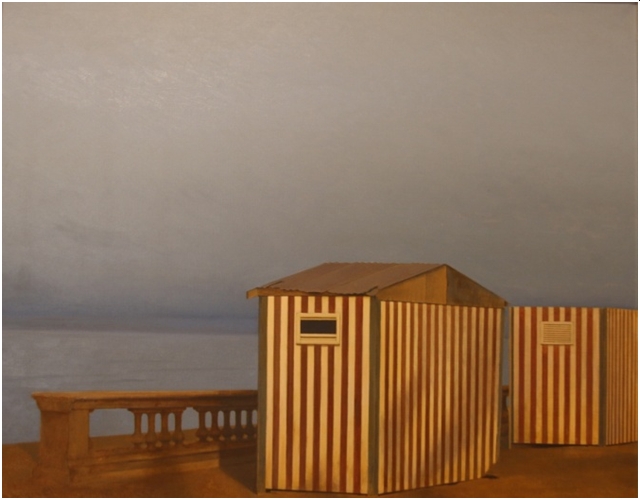 When viewing the photographs of Roger Ballen it is clear how the artist highlights interior spaces of small towns with a strong sense of isolation – even depression. Ballen is known for using uneasy props in his photography – in this instance  eerie portraits against walls seen in Bedroom in Bethulie (1984), whilst Bitten (2004) displays an unidentified figure, wearing a hoody top, disguising his identity and possibly unaware of the snake under his chair.

As Heidi Erdman stated, “Ballen’s dark world, as portrayed in each of his photographs, is a conscious construction. These images only exist in Ballen’s imagination. Ideas for these images may have been born during his travels as a geologist. But small towns seem to have interested him since the beginning of his career. It is perhaps here where he spotted the unfamiliar and eccentricity in human behaviour and form” (Erdman 2012: 15).

Concepts of eccentricity and our forced recent adapted human behaviourism guided me to the second theme I wish to draw attention to. Currently our human consciousness, our own belief systems and the realisation of the temporality of life are a reality now more than ever. I wish to highlight the works of Leon de Bliquy, Sthenjhwa Luthuli, Adriaan de Villiers and Lucky Sibiya. Throughout the history of art mysticism as a genre has been performed and resulted in melancholic and magical realism. Bernard McGinn, a specialist in Medieval mysticism, stated in his article Mysticism and Art that “Since mysticism is a contextual phenomenon embedded in a religious worldview, scholars have also observed that art not only can be a way for mystics to communicate what they are trying to teach, but that images have also helped shape the minds and imaginations of mystics” (McGinn 2001: 131).

The work of De Bliquy, Dans met die Reënboogslang (2002) showcases an amalgamation of mythological animals and objects, symbolism and the artist’s surrealistic representation of animal and human, dancing in a dreamlike world. As Sharon Crampton stated: “The art of Leon de Bliquy grew out of a deep metaphysical foundation where symbols, mythology and poetry merge on the ultimate horizons of dreams. The surrealism of the poets Federico Garcia Lorca, Odysseas Elytis and the mythology of Africa have generated mystical elements in his creativity. A personal experience with failing sight was an important factor in the evolution of his earlier work, where myopic obscurity stimulated the development of an inner vision where the human figure was placed as a connection with the material and spiritual (1990)”. 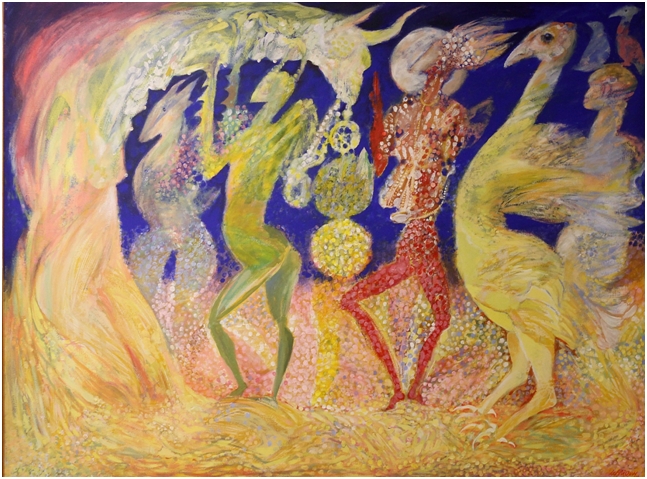 In a similar way, contemporary artist Sthenjhwa Luthuli’s work, Chasing Fear  (2006) celebrates his Zulu heritage and, as he states, his “spiritual self while referencing the ongoing struggles that racialized groups still experience in post-apartheid South Africa.” His compositions feature figures twisted against brightly hued, patterned backgrounds that seem to shift and shimmer. These headless, apparently floating characters appear either unwillingly adrift—the victims of an inadequate social infrastructure—or else ascending to something greater. The artist mentioned that his figures occupy “unknown space”—his term for an abstract territory between the spiritual and physical worlds that the artist accesses to connect with himself and his ancestors”. https://www.artsy.net, artist, sthenjwa-luthuli (accessed on 27 November 2021) 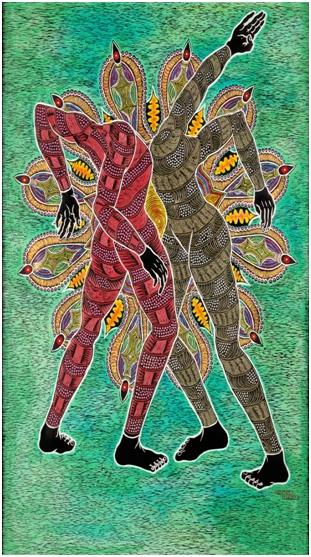 For me, this masterful energetic relief wood carving resembles divine dancing figures. This work forms a synergistic visual dialogue with the sculpture next to it in the exhibition space of Johannes Maswangani’s, Sangoma Music (1990), together with the beautiful collage of Sam Nhlengethwa, Ella Fitzgerald live (2005). Nhlengethwa’s work is extremely vibrant; the energy of the jazz music is almost tangible. 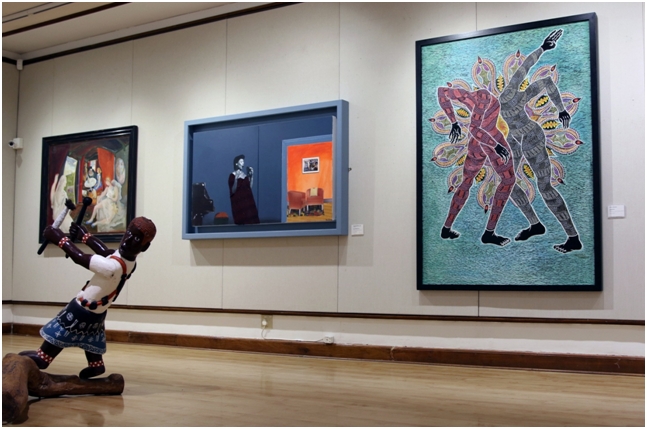 Rituals and cultural acts, often performed by celebratory moments or funerals, provide the last focus point for this article. A ritual can be a formal or an informal occasion. I think many new rituals were introduced during these past few months. And sadly some conventional rituals had to be adapted or changed.

To prevent or change the dynamism of rituals can be a traumatic experience for human beings. This is yet another human behaviourism we had to adapt and adhere to, due to the Corona Virus. This rapid shift in how we are allowed to perform rituals clouded our enthusiasm to mourn, bringing a child into life or celebrating marital festivities. Rituals as a performance and embodiment cannot be ignored, as Sabina Magliocco explained with this article Ritual creativity, Emotions and the body, “we sought to explore the importance of emotions and embodied experience in the context of innovative contemporary rituals”. Magliocco is specifically interested in analysing the ways in which ritual experiences manifested themselves through the body: “how do innovative rituals construe the body or respond subversively to cultural constructions of the body? How does ritual creativity manipulate the schemes, hierarchies and symbol systems inscribed upon the body in order to bring bout socio cultural shifts?” (Magliocco 2014: 1).

Happiness, or as Magliocco uses the example of social and cultural shifts, can be fostered in new and old ritualistic acts; such as dancing, singing cooking and even fishing. 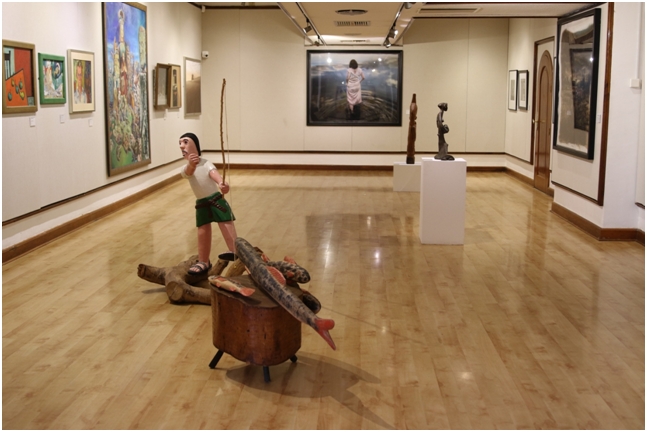 In conclusion, I need to emphasise that the main concept of this exhibition was not only to focus on the harsh, depressive realities our country had to face during the last 21 months. Rather it was to acknowledge this realism by contrasting isolation with festive rituals and celebrations together with joyful moments and the possibility of upcoming holidays and leisure activities.

With the beautiful linocut done by artist Sandile Goje, Kids watching Christmas sunrise (2012), I want to leave the reader with the following question: can traditional festivities be revitalised with new memories and cheerful celebrations that will create new optimism without feelings of negativity or hopelessness?