‘Peace prizes’, noted University of Bradford academic Peter van den Dungen, ‘are awards given to individuals or to organizations for distinguished achievements or efforts in promoting peace’[1]. These awards aim to ‘honor, support and encourage a peacemaker’ or to encourage others to emulate the life and deeds of a great peacemaker. More importantly, they provide ‘legitimacy for their activity as well as a degree of protection for their person where these were lacking before’[2]. One such award is the Olof Palme Prize, established in February 1987 and awarded by the Olof Palme Memorial Fund for International Understanding and Common Security (Swedish: Olof Palmes minnesfond för internationell förståelse och gemensam säkerhet). 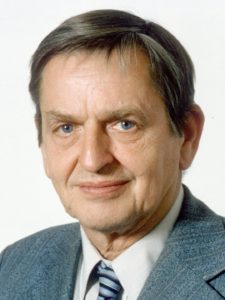 The award is named after former Swedish Prime Minister and leader of the Swedish Social Democratic Party – and a close associate of Oliver Tambo – Olof Palme. It is awarded in the areas of anti-racism, human rights, international understanding, peace and common security.[3] The first recipient of this award was one Cyril Matamela Ramaphosa – then Secretary-General of the National Union of Mineworkers of South Africa. This was surprising considering the large number of potential candidates that were involved in peace efforts throughout the world.

The institution of this award and its linking of Palme, Tambo and Ramaphosa, therefore permanently unites the efforts of three fierce campaigners for social justice. In this regard the Palme Foundation were unequivocal that the ‘first recipient of the Olof Palme prize’ was an individual worthy of recognition and one who made ‘an outstanding contribution to peace, disarmament, international understanding and common security’. The first award recipient, noted Frazer, was well-deserved and ‘this prize certainly reflects the effect of Mr. Ramaphosa’s twenty years in the forefront of the struggle to obtain majority rule in South Africa’[4].

Despite the global acknowledgement, Ramaphosa, inaugural recipient of the Olof Palme Award and South Africa’s president during the current global Covid-19 pandemic, remains an enigma for most South Africans born after the demise of apartheid. Similarly, the average citizen who lived under the silencing effects of apartheid legislation before 1994, has also little information about the background of the man whom the World Health Organisation (WHO) director-general Dr Tedros Adhanom Ghebreyesus, praised and thanked in a recent Tweet:

‘I thank President Cyril Ramaphosa for his leadership and all South Africa’s government and all of society Covid-19 response with citizens doing their best to adhere to the measures taken to contain the coronavirus.’[5] 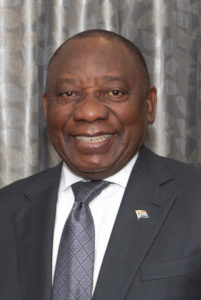 Cyril Matamela Ramaphosa, the second child of Erdmuth and Samuel Ramaphosa, was born on 17 November 1952 at the tail-end of the Defiance of Unjust Laws Campaign against apartheid. His birth also came seven months after the nation-wide celebration of the Van Riebeeck Festival in commemoration of 300 Years of Dutch colonialism in South Africa. During the course of the same year, Olof Palme became personal secretary to Tage Erlander, then Swedish Prime Minister.

Growing up in Western Native Township and Soweto, he amongst others attended the local Sekano-Ntoane High School and later the Mphaphuli High School in Sibasa, Limpopo, where he matriculated in 1971, two years after Olaf Palme became the Prime Minister of Sweden (October 1969), after a stint as an ordinary member of cabinet.[6] Ramaphosa’s school career intersected with both the battle against ‘Bantu Education’ – a system of education in accordance with the Bantu Education Act, 1953 (Act No. 47 of 1953) which enforced racially-separate education and inferior education for all blacks – and the 1960 Sharpeville shootings. The designated education system, noted an editorial in the journal Liberation, was nothing less than a ‘deliberate effort to use the schoolroom as an instrument in the implementation of apartheid and white baasskap’.[7]

Black resistance to apartheid and the subsequent death of protestors at Sharpeville, and arrests and banning of both activists and political organisations throughout the country, prompted international opponents of racism – such as Sweden – to visibly demonstrate their unequivocal rejection thereof. In addition to the establishment of the Fund for Victims of Racial Oppression in South Africa (founded in 1959), a new organisation named the Swedish South Africa Committee was established in 1961 as an ‘umbrella organization of various human rights groups and church organizations’ opposed to apartheid.[8] Palme and his party, the SDP, were central in these developments.

In 1972 Ramaphosa registered at the University of the North (Turfloop) for the qualification of BProc. As a student, he became involved with both the South African Students Organisation, established by the likes of Steve Biko, and the University Christian Movement – thus combining politics and religion in his day-to-day activities. At the Institution, he became chairman of both organisations in 1974. His second year of study saw Olof Palme, then Prime Minister (first term 1969-1976) and leader of the SDP, declaring to the world at its party’s congress in October that:

‘The liberty of the individual will benefit most if he is able to find paths to a sense of community with others, to co-operation and solidarity. The individual must be able, together with others to control his own situation and to influence his own surroundings. But in order to realize our ideas, we must find practical ways to social equality, solidarity and democracy.’[9]

Ramaphosa’s involvement with the CSM dated back to his high school years at Sekano-Ntoane High School. According to a contribution in the school’s yearbook, Ramaphosa in his capacity as chairman/president of the organisation, outlined the role of the organisation as ‘to lead students to accept Jesus Christ as their personal Saviour and to live as true disciples of Christ and to urge students to devote themselves to the extension of the Kingdom of God within their own environment and throughout the world by brotherly service and evangelistic witness’ (author’s emphasis).[10] This statement, and the biblical injunction to build the kingdom of God within their own environment, was in line with some of the key tenets of ‘black’ and liberation theology.

Black theology, ‘a conscious, systematic theological reflection in response to Black experience’, and one ‘characterised by humiliation and suffering in racial societies’, departed from an understanding that ‘God was on the side of the oppressed’. [11] Fighting the system, accordingly, was morally justifiable. The teachings of the likes of Martin Luther King Junior during the American civil rights struggles of the 1960s, arrived on South African campuses from 1967 onwards thanks to the University Christian Movement (UCM), and on black campuses from 1971. The UCM promoted itself as ‘an interdenominational organisation’ with the objective of exploring ‘what the church and individuals could do to bring about change in South Africa’.[12]

As a result of his political activities under the SASO umbrella, Ramaphosa experienced his first of two long-term detentions. The first, under Section 6 of the Terrorism Act (Act 38 of 1967), saw him spending 11 months in solitary confinement for interrogation purposes in Pretoria Central Prison in 1974. Being kept in solitary, noted former political prisoner Hugh Lewin, was not only ‘life without any trappings’, but also a ‘stripping process at its most essential’.[13] This naturally interrupted his academic studies. Upon his release, he joined the Black People’s Convention while working for a Johannesburg law firm towards completing his articles. Two years later, he was detained again – this time in the aftermath of the Soweto Uprising. He was kept for six months at John Vorster Square, the headquarters of the South African Security Police and the site where anti-apartheid activist Ahmed Timol (1971) lost his life within five days after his detention.  In the background, Palme called for more direct support for the

The period after Ramaphosa’s detention saw the death of Steve Biko in custody and the banning of most anti-apartheid organisations, including the Black People’s Convention. This left a political vacuum during the ensuing period. On the labour front, a combination of political repression, economic recession, and managerial workplace-bullying and intimidation, left independent black trade unions ‘.[14] By 1977, Palme called on Socialist International to ‘engage in a high-profile support to the liberation movements in Southern Africa’. To this end he travelled the world to mobilise such support, including a visit to the southern part of the Continent.[15] By 1979, the Swedish government, as a result of consistent pressure from Palme and the SDP, placed a ban on further investment in South Africa.

The start of the new decade saw the start of a nation-wide school boycott in Black schools in 1980 and 1981, with young people continuing to reject apartheid education. During the lull on the political scene, and after his release, Ramaphosa continued his studies, this time through the University of South Africa (UNISA). He completed the degree of BProc and his articles during 1981, whereafter he joined the Council of Unions of South Africa (CUSA) as its legal adviser.

The start of Ramaphosa’s trade union career in 1982 coincided with the start of Olof Palme’s second term of office. The establishment of trade union federations, such as the Federation of South African Trade Unions (Fosatu) and CUSA in 1980 signalled the regrouping and resurgence of organisations that represented both black economic and political interest. Ramaphosa therefore played a critical role in this revival, and by December 1982 became the Secretary-General of the National Union of Mineworkers – a position he kept until 1991. Within the space of four years he grew the union from 6000 members at eight mines to 340 000 members. By 1984, membership stood at 110 000.  Backed by these impressive numbers, and the union’s own consistent struggles, NUM not only won recognition from the Chamber of Mines but also held the first legal strike for black workers.  This work was further expanded, and by 1985 Ramaphosa played a key role in the formation of the Congress of South African Trade Unions (COSATU).

Palme, in turn, with his hands now firmly on the levers of power, in collaboration with started his new term of office by launching, amongst others, an initiative called Planning for a Post-Apartheid South Africa (PASA). In addition, his government hosted the Swedish People’s Parliament Against Apartheid (SPPAA) in February 1986.[16] This was preceded in October 1985 by the Nordic Programme of Action against Apartheid South Africa to intensify the struggle. During the People’s Parliament, Palme noted: ‘This system can live on because it gets support from outside. If the support is pulled away and turned into resistance, apartheid cannot endure. If the world decides to abolish apartheid, apartheid will disappear.’[17] One week after the event Palme was assassinated under suspicious circumstances.

Four months after COSATU’s formation, in March 1986, Ramaphosa became part of a seven-person COSATU delegation to Lusaka, Zambia, to have discussions with the banned ANC and SA Congress of Trade Unions. Upon his return and concomitant with the outbreak of nation-wide anti-apartheid protest and harsh state repression, he went into hiding. During this period, he also left the country without official sanction to attend the conference of the British National Union of Mineworkers. On his return he had to operate under strict travel restrictions. Soon after, he was nominated to become the first recipient of the newly-instituted Olof Palme Peace Prize. The apartheid government initially refused him travel documents to receive the prize in Sweden but finally relented as a result of international pressure.

After the death of Palme, Ramaphosa continued to contribute towards South Africa’s transition to democracy, including the formation and campaigns of the Mass Democratic Movement. He further participated in constitutional talks, and served as member of both the National Reception Committee preparing for the release and welcome rallies of Mandela and Others and  From December to April 1994, Ramaphosa served as a member of the Management Committee of the Transitional Executive Council charged with ‘levelling the playing field in the run-up to the election.’[18]

[17] Speech made by the Prime Minister, Mr. Olof Palme, at the “Swedish People’s Parliament against Apartheid” at Folkets Hus on 21 February 1986. Available from http://www.olofpalme.org/wp-content/dokument/860221b_folkriksdag.pdf. Accessed 20 April 2020.