In a recent assessment around the impact of the Covid-19 pandemic, the Food and Agricultural Organisation (FAO) of the United Nations Organisation (UNO) noted that the  ‘pandemic is impacting global food systems, disrupting regional agricultural value chains, and posing risks to household food security’. It also stressed the need to ‘ensure the safety and well-being of staff and beneficiaries’.[1] ReliefWeb, a humanitarian information service provided by the UN Office for the Coordination of Humanitarian Affairs (OCHA), further observed that lockdowns and other control measures including restricting access to income-earning activities, aimed at curbing the spread of the virus, has both ‘increased the magnitude and severity of acute food insecurity’ around the world.[2] This prompted the head of the World Food Programme, David Beasley, to make a global call for the prevention of a ‘food pandemic’.[3] This came in the aftermath of President Cyril Ramaphosa’s earlier call during his announcement of the first three-week lockdown that:

‘Our people need to eat. They need to earn a living. Companies need to be able to produce and to trade, they need to generate revenue and keep their employees in employment.’

For Food for Mzansi, a local organisation that aimed to ‘introduce South Africans to the unsung heroes of the agricultural industry’ and who ‘unashamedly share success stories and good news from the farms and agri-businesses who feed South Africa’, the issue was fairly simple: farmers are a ‘godsend during this epidemic’.[4] Given the importance of sustainable and easy access to food during the pandemic, governments globally announced extraordinary measures to protect both production and distribution. Amongst these were the issuing of protective gear to food workers to protect both them and their produce and to prevent food contamination.

The crisis, noted British journalist Robert Reich, has brought into focus, and ‘shines a light on a new kind of class divide and its inequalities’ between the ‘Remotes’ (the relatively well-off professional, technical, managerial workers and those able to work from home), the ‘Essentials’ (nurses, homecare and childcare workers, farm workers, food processors, truck drivers, warehouse and transit workers, medical- and para-medical employees, sanitation workers, police and traffic officers, firefighters, and the military), the ‘Unpaid’ (unemployed) and the ‘Forgotten’ (those in prisons, street people, undocumented immigrants, the homeless, those in shelters, and those in nursing- and old-age homes).[5] The common factor, however, remains the universal need for food security.

Despite their importance under current conditions, media reports indicated that those in the ‘essential’ group continued to face challenges within the workplace. During early April, American fast-food restaurant staff in California went on strike under the slogan, ‘Worker Health is Public Health’, ‘No Gloves, No Masks, On Strike Now!’ in response to a lack of protective equipment.[6] This complaint was also echoed by a group of grape pickers in the Sacramento Valley.[7] Similarly, the non-governmental organisation, Groundup, revealed the plight of seasonal female farm workers in the De Doorns district of the Western Cape, who as a result of no access to transport or food parcels during the lockdown, feared starvation. Groundup and a sister organisation, Women on Farms therefore took up their plight.  The struggle for food security and worker rights is reminiscent of the struggle of South African workers in the food and canning sector both during the apartheid years and currently to make ends meet. During apartheid in particular, individuals such as Oscar Mpetha and Liz Abrahams were particularly prominent. Against the background of the Covid-19 struggle for food and job security, this article recalls the contribution of former trade unionists, Oscar Mpetha and Liz Abrahams to the historical struggle of the food and canning workers of South Africa.

Up to the first part of the 20th century, employers, whether farmer or factory owners, were free to pay workers whatever they wanted. With work that was mostly seasonal or arranged as day- or piece- work, workplaces were unregulated, with very little or no service benefits (pension, medical aid, unemployment insurance, collective bargaining rights, transport, protective clothing, rest rooms, transport, maternity leave and breaks such as lunch time). It was also not uncommon for workers to work a 12-hour day under unsafe and dangerous conditions. In response to this exploitation, workers organised themselves and by 1941 had established the Food and Canning Workers Union (FCW) under the guidance and leadership of activists such as Ray Alexander. This was a non-racial organisation that attracted members from all racial groups in both factories and farms. 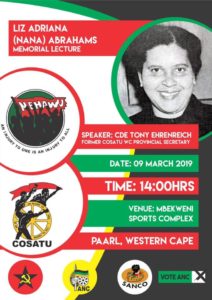 Elizabeth (‘Liz’) Abrahams joined the union from the start and over time  progressed from Subscriptions Steward (or ‘subs’ steward – representative charged with the weekly collection of subscription fees from members) at the Paarl factory where she worked, to National Treasurer and eventually Secretary- General of the union in 1954. Her progress through the ranks of the union was brought about by the fact that women, faced with the reluctance of their male counterparts to ‘serve’ and to face the wrath of the hostile employers, had to take the lead in fighting for better working conditions.[8] Oscar Mpetha, one of the exceptions in this regard, joined the union during the late 1940s, and became its General-Secretary in 1951.

The FCWU scored its first major success in 1945 when it won a wage determination for the fish canning industry. This resulted in a new wage dispensation and slightly better working conditions. The fight was, however, far from over. During the ensuing years, the struggle for improved salaries and working conditions in fishing factories and canneries continued unabated, with countless strikes, constant conflict between managers and shop stewards, dismissals, workplace deputations, and stand-offs with scab labour.

The advent of apartheid in 1948 inaugurated a new phase in the life of the union. In terms of the amended Industrial Conciliation Act (Act 11 of 1924) non-racial trade unions were outlawed. This forced trade unions to divide along racial lines with a separate organisation for each ethnic group.  Failure to submit to the law would have resulted in the union’s deregistration. When the union complied, the regime registered only the Coloured section while the registration of its African counterpart was held in abeyance. In response, the union tactically decided to use the existing ethnic registration to maintain its unity and integrity. To this end, they instituted a set of separate organisational records for inspection purposes. During salary negotiations, however, it acted as one unit with Abrahams as the face of the coloured section and Mpetha as the African spokesperson. When employers objected, the union resorted to factory-level bargaining instead of collective bargaining through a Conciliation Board.  Both trade unionists also became politically active as a means of ensuring additional mass support for their factory floor campaigns. While Mpetha was a member of the African National Congress (ANC), Abrahams joined the Coloured People’s Congress (CPC), both anti-apartheid formations.

When Mpetha was banned in 1954 for his activities in the ANC, Abrahams became the FCWU’s chief negotiator and Secretary-General of both sections. This led to new problems since in terms of the Conciliation Board’s system, each ethnic group was required to represent its own. When the employers refused to engage the united FCWU centrally, the union resorted to factory-based negotiations where it was significantly stronger and able to exercise its full might. It also excluded government representatives from the bargaining process.[9]

Throughout, the Union and its representatives suffered intimidation by the Security Police. Abrahams, who in the intervening years also joined the Federation of South African Women to advance gender equality, in addition to serving on the executive committee of the SA Congress of Trade Unions (Western Cape) was finally served with a five-year banning order in 1964. By this time, both the ANC and the Pan Africanist Congress (PAC) were outlawed in the aftermath of the Sharpeville Uprising. This notwithstanding, the workers continued their struggle and the two unionists continued to meet secretly – even in a factory toilet- to advance worker interests.[10]

After the expiration of their banning orders during the late 1960s, both Abrahams and Mpetha continue to work for the best interests of food workers until 1994 and the dawn of South Africa’s non-racial democracy. Oscar Mpetha died on 15 November 1994, seven months after Nelson Mandela assumed the country’s presidency. Liz Abrahams in turn became a member of parliament and retired from there in the year 2000, only to resume working for the betterment of the conditions of farm workers. She died on 17 December 2009, true to her declared and unwavering belief that ‘the sacrifices were there but I must admit that the burden was not too heavy’.[11]

As South Africans ponder their own situation, especially issues around food security and safety under the current Covid-19 lockdown, spare a thought for the struggle of food workers and their leaders as they continue to fight for better working conditions and their own food security. Let us at the same time pay tribute to those who pioneered the fight for a living wage.

[5]Robert Teich, “Covid-19 pandemic shines a light on a new kind of class divide and its inequalities”, Guardian, 26 April 2020. Available from

[7] Evelyn Nieves, “Farmworkers are deemed ‘essential’ but are not protected from COVID-19”, Greenbiz.com, 23 April 2020. Available from https://www.greenbiz.com/article/farmworkers-are-deemed-essential-are-not-protected-covid-19. Accessed 28 April 2020.