On 10 July 1963, the first South African rugby league national team, the Rugby League Springboks, played against Monaro at the Manuka Oval in Canberra, Australia. This game, the second of their thirteen match tour through Australia and New Zealand, was the first attempt towards regular international tours. 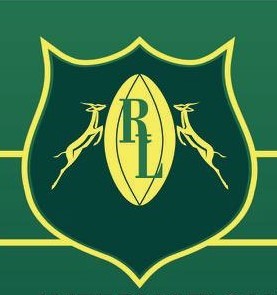 The touring team’s name, which they shared with their more famous rugby union rivals, the Springboks of the South African Rugby Football Board (SARFB), was derived from RLSA’s official logo which consisted of two springboks in the act of jumping on both sides of an upright rugby ball. This choice of name and logo was hugely contentious with the SARFB attempting to retain exclusive use of it under the existing legislation. 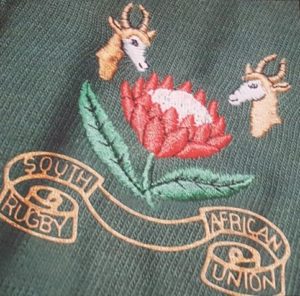 , while the latter emblem consisted of a leaping springbok against the background of a map of Africa. This notwithstanding, the rugby league national team embarked on the first-ever rugby league tour by a South African representative team.[1] 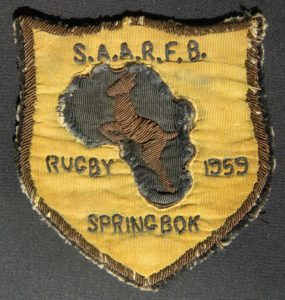 On their arrival at Sydney Airport, the team was met by a group of more than 200 anti-apartheid protestors from the University of New South Wales. This action was already well into its planning stages before the team even left South Africa.[2] The Canberra Times reported:

“When the 23 members of the South African team emerged from the Customs hall, officials foiled the student demonstrators by taking them into an airport lounge for Press, radio and television interviews. The students had to wait an hour before the South Africans eventually left the terminal building to board their bus. The burly South Africans, some smiling and some frowning, walked slowly in single file along a narrow corridor made for them by uniformed police through the jeering students. As the players entered their bus, the students chanted: “Football yes — apartheid no.”[3]

The match against Monaro was preceded by the Springboks’ opening match against Northern Division of the New South Wales Country Rugby League in Tamworth, New South Wales. Given the protests at the team’s arrival, the organisers prepared for any eventuality. Such preparations included having a police presence at the match. No protestors, however, turned up. This assisted the tourists to record their first tour victory by 20-10. Given their long travel and need to gel as a team, the post-match review noted that while the team was “far from impressive”, player Martin Pelser 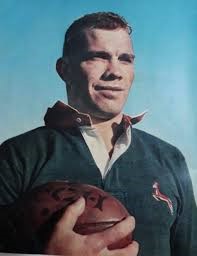 was impressive and that he “played right up to his reputation as the team’s best loose forward.”[4] Against this background, the South African tourists prepared for their second match against Monaro.

On their arrival a day before the match, they were met by yet another round of demonstrations by anti-apartheid protestors at Fairbairn Airport. This group came from the Australian National University. To ensure order, a police presence was maintained. Following their placard demonstration, the protestors issued a statement that read as follow:

“We are in particular protesting against the policy of the South African Government, and sporting bodies, of selecting sporting teams on the grounds of race, its policy of not allowing coloured teams to tour South Africa, and asking sport bodies from multi-coloured nations not to include coloured people in their team.”

Similarly, the New South Wales Labour Council distributed a pamphlet endorsed by 16 trade unions which condemned apartheid. In its statements, the Council appealed to the visiting players “to work for the end of racial discrimination when they returned home.” They further emphasised that:

They were supported by a new committee, the Committee for Human Rights in South Africa under Dr. R. Gollan who committed not only to express their opinion about the rugby league tour but all others to follow.[7]

In its pre-match review and build-up to the kick-off, the Canberra Times, in an interesting aside, reported that the South African team’s pre-match meal would consist of steak and honey – a combination that the President of the Country Rugby League, Mr. AM Kingston, noted “was one of the strangest he had heard from touring teams.”[8]

Ackermann, a Springbok during the 1956 tour of New Zealand, was to captain the team. Given the experience of players like former Bloemfontein Aquilles and Free State star Gert “Oupa” Coetzer, and fellow team members Gaydon, Skene and Greenwood in British rugby league, much was expected from them. Indeed the reporter in his preview noted that Coetzer and “smart second-rower Martin Pelser are expected to provide the thrills today.” 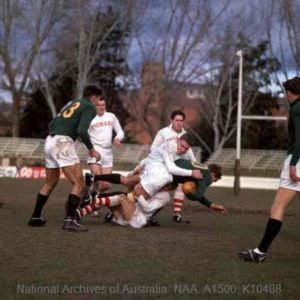 Despite the distractions, the South African team put up an impressive performance. The tourists, reported the Canberra Times, “dazzled the home side with their smooth teamwork, constant backing-up, and sheer pace.”[9] This resulted in the Springboks scoring nine tries to zero in their 41-2 victory.

Two days after the match, a local individual, PW Atkinson, in a letter to the local press, apologised for the demonstrations that characterised the Springbok-match. Noting that since the university protesters did not represent any particular organised grouping, he stressed “we are objecting strongly against demonstrating against these footballers whose political views, I’d say, in most cases are unknown”.[10] This letter, seemingly, was in response to an earlier one in which a reader of the Canberra Times comprehensively explained the existence of apartheid in South African sport.[11] The tour, clearly, created divisions in Australian society.

Image 2: Badge of the SA Coloured Rugby Football Board

Image 3: Badge of the SA African Rugby Football Board