Friday 3 July marked the commemoration of one of the key moments in the history of South African rugby. On this day 49 years ago, the South African Rugby Union (SARU), formerly known as the South African Coloured Rugby Football Board (SACRFB), hosted its first final of the South Africa Cup Inter-Provincial rugby competition. Taking the field on this auspicious occasion was the Western Province and Eastern Province. The right to the final was only achieved after a gruelling week-long competition which involved a total of 12 provinces. Other than the two finalists, the competition consisted of Boland, North West Cape, Border, Western Province Country, Central Karoo, City & Suburban, Natal, South Western Districts, Griqualand-West and Transvaal. Played at the Athlone Stadium in Cape Town, this event was not only the highlight of the rugby season, but also represented the hope and striving of black rugby players for a non-racial and apartheid-free rugby establishment. 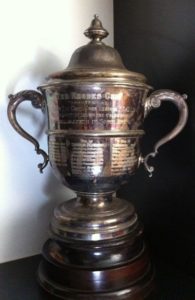 The South Africa Cup replaced the Rhodes Cup which was the premier competition of the South African Coloured Rugby Football Board (established in 1897). The organisation’s designation as ‘Coloured’ since its founding until 1966 when it changed its name, was in line with 19th century and colonial practices when it was common to refer to all non-whites (also referred to as Non-Europeans) in such a manner. The SACRFB was the first national body that controlled black (both Coloured and African) rugby in the country and came into being after players of colour were denied accessed to existing clubs and associations, including the South African Rugby Football Board, all of which were established by Whites. In direct response to this segregatory practice, Rule 25 of the SACRFB’s founding constitution unequivocally declared the organisation as being a non-racial body and therefore open to all irrespective of race, colour, religion or creed. I was amongst those who firmly opposed any form of discrimination.

Since White rugby had its own inter-provincial competition for the South African Rugby Board Trophy and Currie Cup, it was only natural for the SACRFB to follow suit and to launch their own. Soon after its establishment, the organisation approached well-known colonial British businessman and former Prime Minister of the Cape Colony, Cecil John Rhodes to secure a trophy equal in stature to that of the Currie Cup. Rhodes responded positively and donated a trophy which the SACRFB decided would be competed for on a biennial basis in Kimberley. 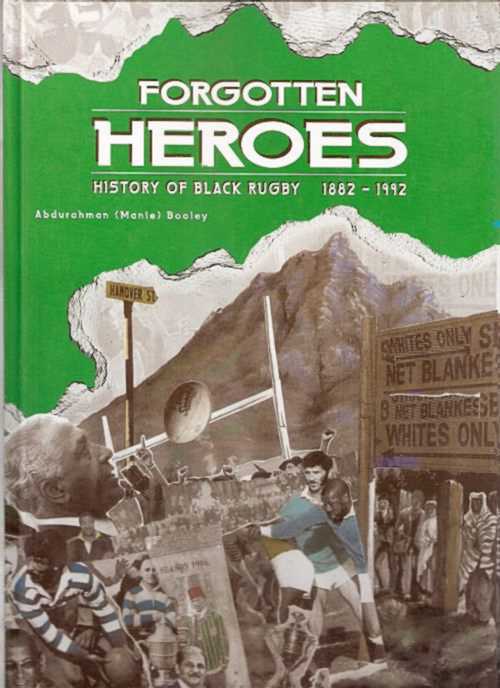 The inaugural Rhodes Cup tournament kicked-off on 20 August on the Kimberley Grounds and concluded on 27 August 1898. Admission to the matches was three shillings for a pavilion seat, two shillings for temporary seating and standing room for one shilling. P. Maher of the Western Province became the first player to score a try in the tournament. On the final day, Western Province played Transvaal while Griquas faced Eastern Province. The men from Cape Town and Kimberley walked away victorious by 8-0 and 11-6 respectively, and received medals from the Kimberley Mayor to commemorate the event. South African Rugby Football Board Springbok J.T. (Chubb) Vigne, (Springbok Number 3) who represented South Africa on centre in the first test series against the British Touring team of 1891, was one of the tournament referees of this historic tournament. Between its inauguration in 1898 and its final shelving in 1980, 28 inter-provincial tournaments were played. The first- ever cup holder was the Western Province Rugby Union, with the last one being won by the Western Province Country Districts. The decision to discontinue the Cup competition in 1969 and again after 1980 (after its one-year re-instatement), was based on a rejection of the political legacy of Rhodes as an imperialist and his company’s exploitation of black workers in the mining sector. The Rhodes Cup was then replaced by the South Africa Cup in 1971. 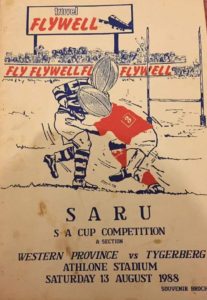 The first-ever SA Cup competition formally kicked-off on  Saturday 26 June 1971, with the historic opening match at 10h00 between Western Province Country Districts (WPC) and Natal. This was followed by the following matches: Border vs North Western Cape (NWC), Transvaal vs South Western Districts (SWD); Mid-Karoo (or Central Karoo) vs City & Suburban (C&S), Griquas vs Western Province (WP) and Eastern Province (EP) vs Boland. The rest of the programme was concluded over the course of the next week with the final scheduled for Saturday, 3 July. The media reports in the aftermath noted that players such as Ismail Baderoen (WP), Cassiem Jabaar (WP), Okkie Morkel (EP), Andrew Grootboom (SWD), Roy Killian (EP), Peter Killian (EP), Chris Oor (NWC), made a lasting impression over the course of the tournament.

The final was a hard-fought one with Western Province under the leadership of Salie Fredericks in impressive form. They outplayed their opponents by 19 points to 6. For the winning team Fuad Gameldien, Yusuf Kamaar, Ismail Baderoen and Sedick Pretorius scored tries. In addition, Mogammat Theunissen contributed two conversions and Armien Manuel, a penalty. Eastern Province’s point came from a try by Wilfred Harris and a penalty kick by Okkie Morkel.

Between 1971 and 1991, 21 SA Cup finals were played.  Western Province were cup champions for 7 years, followed by Tygerberg (5 times), Kwazakhele (3 times), Eastern Provinces (3 times), and Boland (once). The trophy was shared on one occasion (1980) by Boland and Eastern Province. It was not awarded after a particularly difficult season in 1974. The referee who enjoyed the distinction of having officiated in the most finals  was U. Meir, who was the man in charge on seven occasions.

Following the formation of the South African Rugby Football Union (now SA Rugby) after 1992, the competition with the SA Cup trophy as prize is now known as the First Division Cup.