The girdled lizards (genus Cordylus) are a group of 21 species of well-armoured insectivorous lizards found only in sub-Saharan Africa. These diurnal and mainly rupicolous lizards occur from the south-western Cape of South Africa northwards through Botswana and Namibia to Angola, and elsewhere to Mozambique, Zimbabwe, Zambia, Malawi, south-eastern Democratic Republic of the Congo, Tanzania and Kenya, with an isolated population in southern Ethiopia. Females give birth to 1–4, occasionally five, young. About 15 additional species had for many years been grouped in this genus, but in 2011 a genetic analysis resulted in its being split into six separate genera.

Most girdled lizards are rock-dwelling, spending time basking on stones or rocks and retreating into crevices to escape enemies and the heat of the sun, but three species are known to use plants for shelter. Jones’ Girdled Lizard (C. jonesii) spends time in hollow trees and under bark, while the Large-scaled Girdled Lizard (C. macropholis) shelters only under the succulent plant Euphorbia caput-medusae, in groups of up to 13 individuals. Another species known to be quite gregarious is the Cape Girdled Lizard, and in some areas a dozen or more individuals may be found together under a single slab of rock. The Tropical Girdled Lizard uses both rocky places and trees for shelter.

Girdled lizards are ‘medium-sized’ lizards. The largest species is the Tropical Girdled Lizard which grows to a body (snout to vent) length of about 11 cm, while the smallest is the Rooiberg Girdled Lizard (C. imkeae) with fully-grown adults having bodies less than 7 cm long. In most species the tail slightly exceeds the body in length, while in a few species it may be slightly shorter or longer, but the tail is almost always shorter than the body in three species, most notably the Ukinga Girdled Lizard (C. ukingensis) which has a tail less than 70% the length of the body. All species are armoured with tough, keeled, overlapping scales and spiky tails. The Large-scaled Girdled Lizard, the most terrestrial species, is especially robust with very spiky scales on the back and tail, perhaps an adaptation to deter ground predators. The only similarly robust species is the Ukinga Girdled Lizard which is endemic to short, rocky grasslands in Tanzania.

Girdled lizards are usually fairly drab in colour, being brown or a combination of different shades of brown, sometimes with some grey thrown in. One species, the Black Girdled Lizard (C. niger)—a species well-known to anyone who has visited Table Mountain in Cape Town—is completely or predominantly black or dark brown (i.e. melanistic), sometimes with a paler underside. The Large-scaled Girdled Lizard is grey with dark brown blotches on the back, while a few species, such as the Zimbabwean Girdled Lizard (C. rhodesianus), have several cream-coloured blotches on the back. By far the most beautifully patterned individuals are found in certain populations of the Common Girdled Lizard. Some of these lizards have a mixture of orange and dark brown scales dorsally, with a cream or whitish stripe down the middle of the back; others may lack the orange but have a handsome dark stripe on each flank.

The author has for several years been involved in various research projects involving the genus Cordylus. For example, in 2007 the first records of the Cape Girdled Lizard in Lesotho were published; in 2016 a new species of girdled lizard (C. namakuiyus) from Angola was described; and in 2021 a study on the relationships and taxonomic status of the dwarf girdled lizards was published (see photos and references). In the latter study, led by collaborator Prof. Krystal Tolley of the South African National Biodiversity Institute in Cape Town, the relationships and taxonomic status of the similar-looking, rock-dwelling, species of the Cordylus minor complex/group (Karoo: C. aridus, C. cloetei, C. minor; Namaqualand: C. imkeae) were studied. These lizards had been described on the basis of small samples at a time when genetic analyses were not generally used to aid in distinguishing species. In the new study, species boundaries were tested by means of multi-gene phylogenetics, niche distribution modelling, and re-examination of diagnostic morphological features with larger samples than in previous studies. The three Karoo species could not be distinguished by genetics or morphology. Using a distribution modelling analysis, from present day to the last interglacial period, it was found that connectivity of its populations was maintained especially during cooler periods. The Namaqualand species, C. imkeae, found only in the Kamiesberg, was morphologically diagnosable, genetically distinct and its distribution range was never connected to that of the other species. It was concluded that the two species C. aridus and C. cloetei are in fact not valid and are part of (i.e. junior synonyms of) C. minor, while C. imkeae is indeed a valid species.

The author and an international team of collaborators are currently evaluating the taxonomic status of populations of Cordylus in the central-western highlands of Angola. Together with his colleague at the National Museum, Dr Cora Stobie, the author is also investigating the taxonomy of the Common Girdled Lizard, which consists of at least three morphologically disparate populations that may represent different species. Both of these analyses involve the use of genetics as well as an evaluation of scalation characteristics, colouration, and head and body dimensions. These studies will allow for a more complete understanding of evolutionary relationships in this fascinating group of lizards. 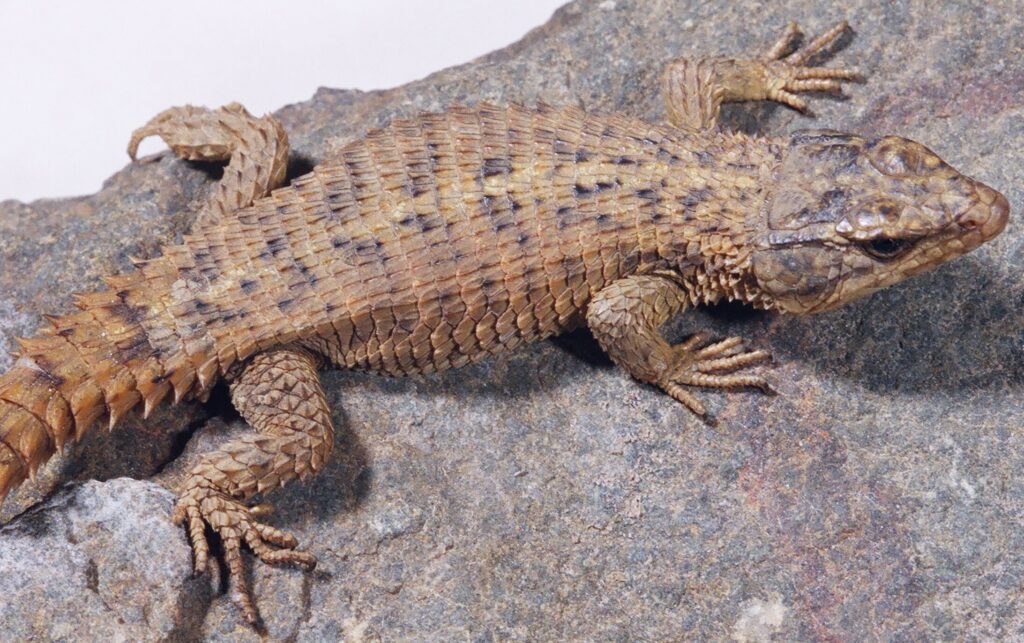 Cape Girdled Lizard (Cordylus cordylus) from Ha Sehlaba, Lesotho. This was one of the first specimens of this species recorded from Lesotho. (Photo: M.F. Bates) 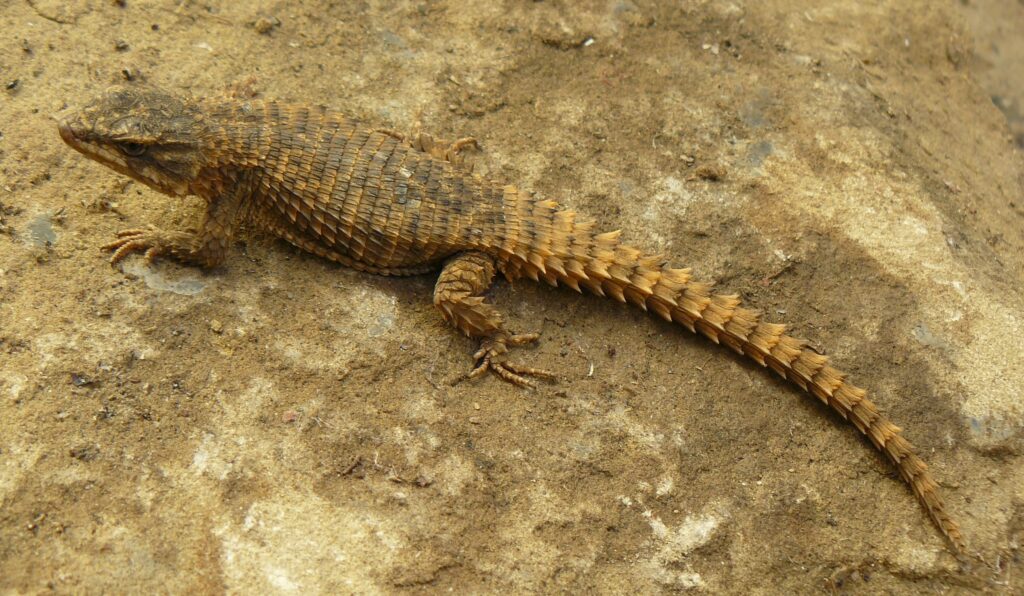 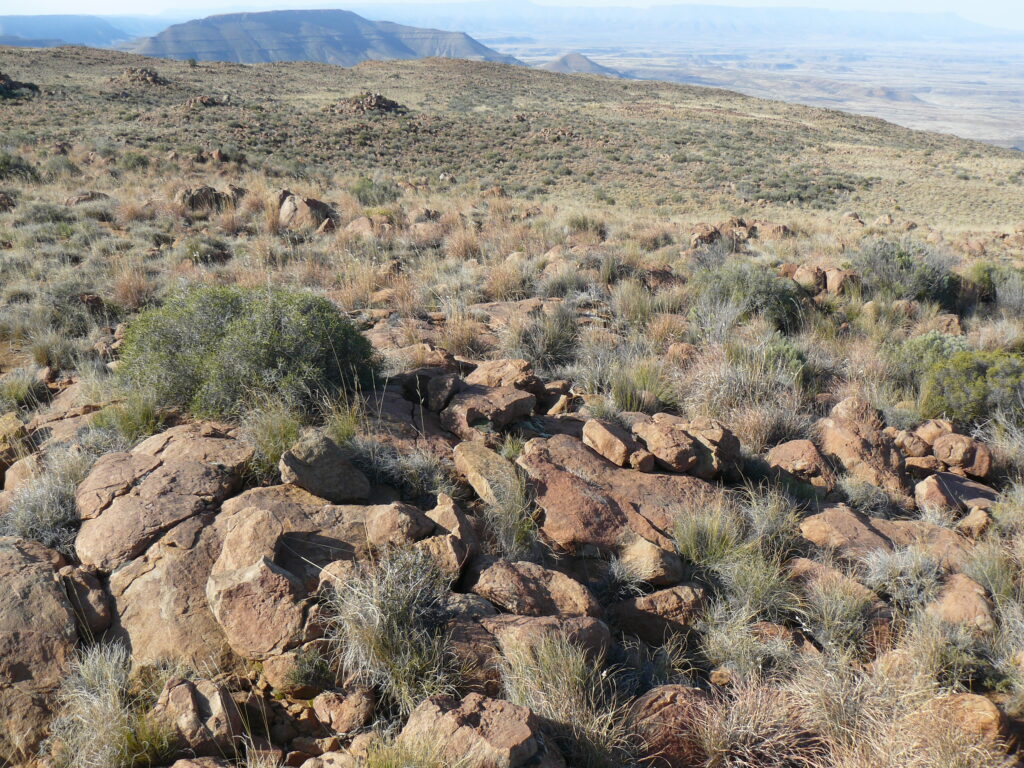 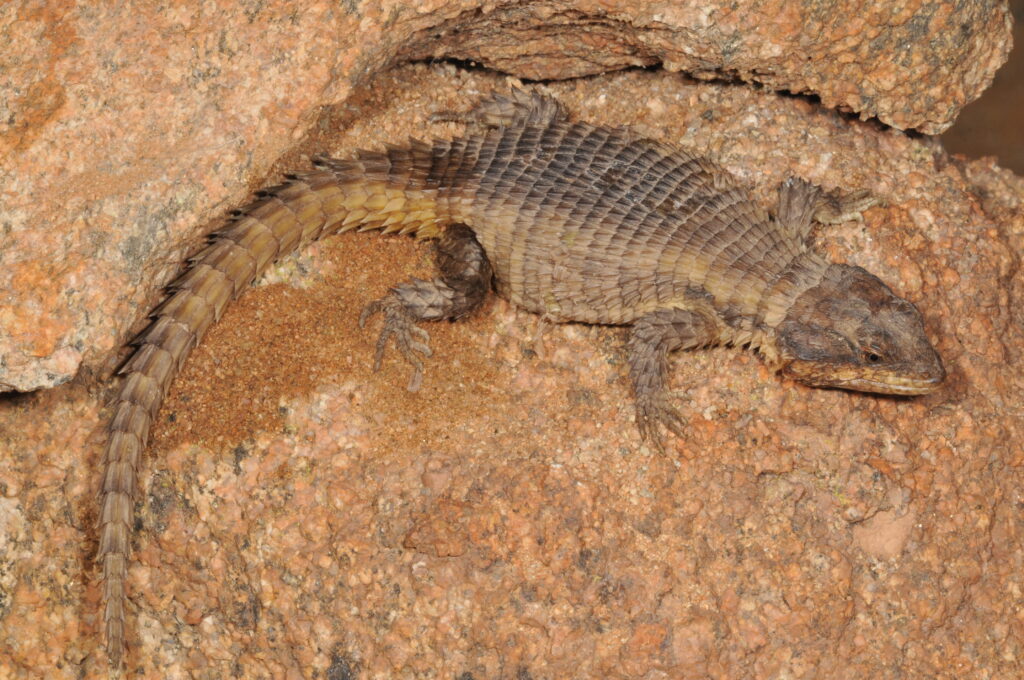 Kaokoveld Girdled Lizard (Cordylus namakuiyus) from Namibe Province, Angola. This species was described in 2016 by Ed Stanley and a team of collaborators including the author. (Photo: W.R. Branch)