Large mammal herbivores are among the most conspicuous elements of terrestrial landscapes. We South Africans all appreciate herbivores as flagships of our country’s natural heritage, enjoying them as food, for sport hunting, or simply for our holiday viewing pleasure. They are an exceptionally diverse animal group, represented by over 100 species on the African continent alone, ranging in size from the 3 kg rock dassie Procavia capensis to the African elephant Loxodonta africana with an average body mass around 4 000 kg (Codron 2013). How such a diversity of forms evolved, and still co-exist today, is nothing short of remarkable. The key to understanding this phenomenon is to recognize the many inherent difficulties of practicing herbivory, to which these animals have had to respond by evolving a diverse set of anatomical (body design) and physiological (body function) traits.

It is really a tough life being an herbivore. Eating plants exclusively means spending an extraordinary amount of time harvesting, chewing, swallowing, and digesting food (Janis 2000). For one thing, plants have a much lower nutrient content than meat (which is primarily protein), and many of those nutrients are bound within indigestible cell walls. To ingest enough nutrients for survival, an herbivore needs to eat about 10 times as much food as a carnivore of the same body size. All this while still having to find time to reproduce, and to be on the lookout for lions sneaking up from behind!

Another challenge is that plant fibres, as well as hardened silica bodies, and even dust binding to the surfaces of leaves, all mechanically grind away at tooth enamel, reducing the surface area available for chewing. If tooth enamel is worn down completely, an animal can no longer feed and dies of starvation. To make a living out of herbivory, mammal herbivores have evolved such features as large, robust teeth that resist mechanical wear, large chewing muscles for processing tough, fibrous foods, and a complex association of gut microbes that assist with digestion by fermentation of fibre. (Humans, incidentally, lack these features, which is why we cannot survive on a diet of raw vegetables alone: even the strictest vegetarians have to process and even cook their plant foods before eating them.)

An animal’s ecological niche is usually defined as “its role in the ecosystem”. The diet niche is an extension of this basic concept to include all the taxonomic and nutritional properties of the animal’s food resources. Herbivores occupy at least three diet niches – BROWSERS (BR) are species that consume leaves and other parts of woody vegetation, herbs, and forbs; GRAZERS (GR) eat grass; and INTERMEDIATE-FEEDERS (IM) eat both types of plants (Figure 1), often switching from grazing during wet seasons to browsing when grasses die-back in the dry season. In reality, the distribution of diet niches is more continuous than this simplistic scheme; the percentage grass or browse in a species’ diet may average 10, or 30, or 70 or any other number between 0 and 100. Recognizing the three niches (BR/GR/IM) does, however, simplify our discussion, and at the same time allows us to reflect on differences in anatomy and physiology that represent peculiar adaptations to a specific diet. 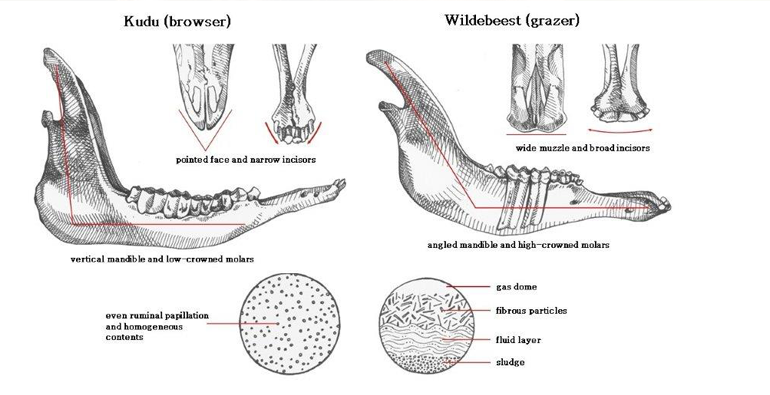 Figure 2.  Grazers (GR) have steeply-angled jaws, high-crowned cheek teeth, deep mandibles, wide muzzles, and a broad,flat incisor arcade, whereas BR have upright mandibles, shorter teeth, and a more pointed face and mouth. GR also have a stratified rumen that slows passage rate and maximizes fermentation time, whereas BR distribute particles and fluids evenly throughout the rumen to push meals through the gut faster and avoid blockage by lignin.

If it’s a tough life being an herbivore, it is even tougher being a GR (Clauss et al. 2008). Leaves and other parts of woody plants occur throughout the vertical landscape (from ground-level forbs to the leaves in the upper tree canopy), and so BR of any size can take bites within their eyeline. Grass, on the other hand, is presented only at ground-level, and so there is a struggle to eat enough grass to be efficient. GR have evolved wide muzzles, thick mobile lips, and a protrusive incisor arcade that acts as a spade, all enabling them to collect enough food from the floor (Figure 2). The mandibular ramus of GR is also positioned at a steeper angle than in BR, so GR spend most of the day with their heads hanging at ground-level – in this way they conserve energy by not needing to stoop in order to feed. Because grass is cropped from the ground, GR ingest more abrasive dust particles, and so have substantially larger teeth that are more resistant to mechanical wear, and larger chewing muscles. Even more intriguingly, tooth enamel ridges of GR are aligned at planes transverse to the chewing plane, so these animals are more efficient at chewing foods which break down into longer particles, as opposed to the polygonal particles of browse.

Grass is also more fibrous than browse, and so it takes longer to ferment and make nutrients available for absorption in the stomach and lower intestinal tract. In the case of ruminants (animals with a four-chambered forestomach, including giraffe, buffalo and antelope), GR slow down passage rates (the time taken to ‘push’ foods through the digestive tract) of solids by dividing the stomach contents into layers of fermenting and non-fermenting particles (Figure 2) (Codron and Clauss 2010). Other features enabling this in GR include smaller salivary glands (less fluid throughput), smaller omasa (less fluid resorption in the third chamber), and fewer feeding bouts (increasing the time available for fermentation of each meal) compared with BR. By contrast, much of the fibre in browse is lignin, a substance that cannot be broken down by microbial fermentation. To compensate, BR ‘push’ solids through the digestive tract faster by having a more even mixture of solids and fluids in the stomach. In one of nature’s most spectacular evolutionary innovations, IM are actually able to change their stomach anatomy in preparation for grazing in the wet season!

Herbivores are Key to Evolutionary Theory

These, and many other features, make herbivores not only diverse in terms of the number of species, but in the number of traits for which scientists can demonstrate a particular function. Importantly, the differentiation of diet niches across specialized anatomical traits does not mean species cannot survive in alternate states – GR can browse and BR can graze, but they do so less efficiently and less competitively (Codron and Clauss 2010). Our understanding of the close links between diet and anatomy in herbivores makes them one of the best examples of adaptive radiation in the animal kingdom. More than just capturing our imagination as scenic wonders of savanna landscapes, herbivores have contributed – and continue to  contribute – to some of the most seminal discussions in evolutionary biology, even since Darwinian times.