During Heritage Month, the Rock Art Department of the National Museum showcased our country’s rich rock art heritage on social media. The virtual showcase covered the rock art of the San, the Khoekhoen and the Korana. Heritage Month is celebrated annually in September. It is celebrated to mark our nation’s diverse culture and heritage.

South Africans are urged to use Heritage Month to foster greater social cohesion, nation building and a shared national identity. The celebration of Heritage Month has created a conducive environment for all people to embrace and celebrate what was inherited or bequeathed to us by our forebears. The theme under which the 2021 Heritage Month was celebrated was “the year of Charlotte Mannya Maxeke: celebrating South Africa’s intangible cultural heritage”.

The San are southern Africa’s indigenous inhabitants. They are referred to as hunter-gatherers because they subsisted by hunting and gathering. They lived in small kinship bands, and had no chiefs or ruling elite. Women collected the staple plant foods, as well as small animals and birds, while the men hunted large game and shared the meat among the band.

San religion involves the belief in a spirit world that the ritual specialists travels to during altered states of consciousness. They access this world during the ritual event known as a trance dance. In this spirit world they can do battle with malevolent spirits who cause sickness to the living, they can capture the rain animal to bring rain and they commune with the spirits of animals to assist the hunters. San rock art is perhaps the most famous of South Africa’s rock art because it is visually outstanding due to the fine-line detail used by the artists.

The Khoekhoen entered South Africa around 2 000 years ago. They were nomadic herders of domestic animals such as fat-tailed sheep and goats. They lived in large groups based on an exogamous clan system. They had to move around to find enough grazing land and water sources for their animals. Moving seasonally, they only stayed in one place for a few weeks. Khoekhoen lived in 𝘮𝘢𝘵𝘫𝘪𝘦𝘴𝘩𝘶𝘪𝘴 (mat covered huts) that were constructed by sticking saplings into the ground in a circle to create a dome-shaped framework, which was covered with mats woven from grass and thin reeds.

Their rock art consist of finger paintings and rough-pecked engravings and the iconography in their art includes, geometric shapes that can represent aprons and beaded decorations and other paraphernalia relating to puberty ceremonies. Due to intermarriage and mixing of cultures many elements in their art resemble San iconography. There are common depictions of animals and images related to women that are located near water sources suggesting a role in female initiation.

The Korana were originally !Kora herders but due to integration and intermarriage became multi-ethnic. They lived in the Ghaap area that between 1652 and 1890 was the chaotic Dutch and British colonial frontier. Pressure placed on them by the movement Tswana, Griqua and European colonists meant that they had to adapt in order to survive. They acquired guns and horses and took to raiding livestock.

The Korana had a complex relationship with the San. They captured San women and children, resulting in intermarriage and exchanging of cultural traits. San were also employed to herd their livestock and assist in raids. The Korana and San had a close trade relationship that included tobacco and marijuana being traded for San honey. The Korana also had close relationships with Tswana groups with some Tswana chiefs marrying Kora women.

However, by 1879 the Korana were finally conquered and were forced into northern and western Orange Free State. This area is prevalent with Korana rock art sites located in hidden caves, and telling the stories of their chaotic relationships with their adversaries. Korana rock art consists of rough finger paintings that include armed raiders on horseback, European colonists, serpents, smears, meandering lines and spread-eagled animal skins. Their rock art embodies symbolism found in Tswana, Khoekhoen and San cultures and is a reflection of their multi-ethnicity. 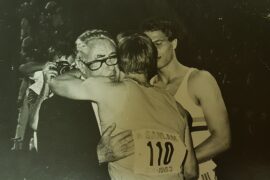 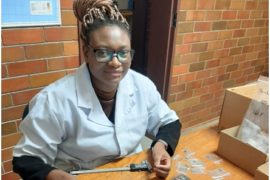 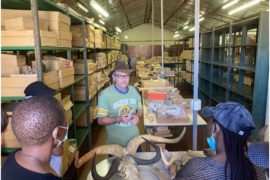