The Khoisan, a unifying name for the Khoikhoi and San, or Bushmen, were the first people in Southern Africa. They were skilled hunter-gatherers and nomadic farmers who lived off the land. Traditionally, the Khoisan wore very little clothing except for a bundle of cloth made of some sort of animal hide around the waist, similar to underwear. The women would wear skirts and strips of cloth of the same animal hide to cover their breasts. They made ostrich egg-shell beads that they strung as necklaces or girdles, sewed into narrow fabrics for head-ornaments, or sewed on to the clothing as adornment.

Team South Africa at the Tokyo Olympic and Paralympic Games surprised many when they walked into the stadium with veldskoen footwear. Veldskoene, or vellies, are shoes made from soft rawhide leather uppers attached to a leather footbed and rubber sole without tacks or nails. The name comes from the Afrikaans word vel (skin), later assimilated with veld (field), and skoen (shoe). They were first made in the 17th century by the Dutch settlers in South Africa, and later became the customary footwear of the Voortrekkers during the Great Trek. However, it is said that the shoes’ design is based on the traditional Khoisan footwear, making them undeniably the first officially identified South African shoe.

The Sotho women are known to put on long skirts and dresses made from a printed dyed cotton fabric known as shweshwe. The fabric is manufactured in a variety of colours and printed designs characterised by intricate geometric patterns. Sotho women often finish off their attire by wrapping a traditional blanket around the waist. However, the traditional Basotho blanket is worn by both men and women; the men wrapping the blanket over their shoulders.

Another statement piece is the mokorotlo or Basotho hat, a conical woven hat with a distinctive topknot, that is said to be a symbol of the Sotho people’s unification and depicts a mountaintop (conical in shape and topknotted) near the fortress and tomb of King Moshoeshoe I.

The Xhosa culture features beautiful beadwork and printed fabrics. Traditionally, women’s clothing includes long skirts and aprons made from printed or embroidered fabrics, known as 𝘶𝘮𝘣𝘩𝘢𝘤𝘰. Elaborate beaded necklaces called 𝘪𝘵𝘩𝘶𝘮𝘣𝘶 are worn around the neck, as well as beaded bracelets and anklets. The 𝘪𝘲𝘩𝘪𝘺𝘢 or headscarf is traditionally worn by married women. To complete the ensemble, embroidered capes or blankets are worn around the shoulders.

On special occasions, Xhosa men will usually wear a tunic with strands of beaded necklaces.

Venda women wear a 𝘯𝘸𝘦𝘯𝘥𝘢 at the waist or around one shoulder, which is made of brightly coloured striped fabric. Beaded necklaces, bangles, and headbands complete the ensemble.

Traditionally, the men wore a 𝘵𝘴𝘪𝘯𝘥𝘪, a triangular piece of animal skin covering the front, passed between the legs and tied at the back. Today, however, Venda men often wear shirts made from the same 𝘯𝘸𝘦𝘯𝘥𝘢 fabric as the women’s dresses with trousers.

In Zulu culture, young unmarried women wear their hair short and only a short grass-reed skirt decorated with beads. However, a married woman covers her entire body to indicate that she is spoken for. She wears a thick, cowhide skirt that has been softened with animal fat and charcoal, called isidwaba. But certainly, the most iconic adornment is the flared disk-shaped hats called isocholo, which are worn by a married woman as a sign of respect to her husband and his family.

The men wear a front apron, known as an isinene, and a rear apron, ibeshu, made from animal skins to cover the genitals and buttocks. Headbands are only worn by married men.

In the Ndebele culture, girls wear small beaded aprons and 𝘪𝘴𝘪𝘨𝘰𝘭𝘸𝘢𝘯𝘪 which are thick beaded hoops worn around their necks, arms, legs, and waist. Married women wear longer aprons made of hardened skin that are beautifully decorated with beads in geometric designs. They also wear copper rings called 𝘪𝘥𝘻𝘪𝘭𝘭𝘢 around the neck, arms, and legs. The colourful blanket, 𝘶𝘮𝘣𝘢𝘭𝘰, usually completes the ensemble. The main clothing item for Ndebele men is an 𝘪𝘱𝘰𝘳𝘪𝘺𝘢𝘯𝘢 or beaded plate which hangs from the neck and is a symbol of manhood that is given to a young man after he has undergone initiation. 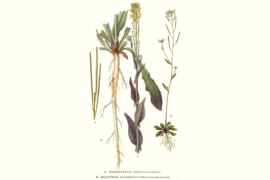 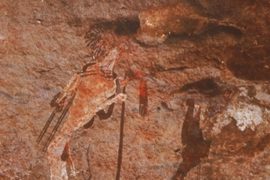 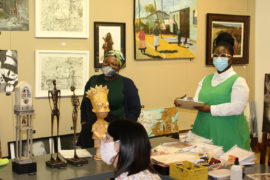