For over three centuries Robben Island, an offshore island within sight of the City of Cape Town, was used by successive governments as a penal settlement and isolation centre. Its detention centres served to safeguard the surrounding society. From the outset the island’s institutions followed a treatment regime that was harsh. During the apartheid years (1948 – 1994), it served as the primary place of detention for anti-apartheid activists who fought for the overthrow of the minority-ruled state. 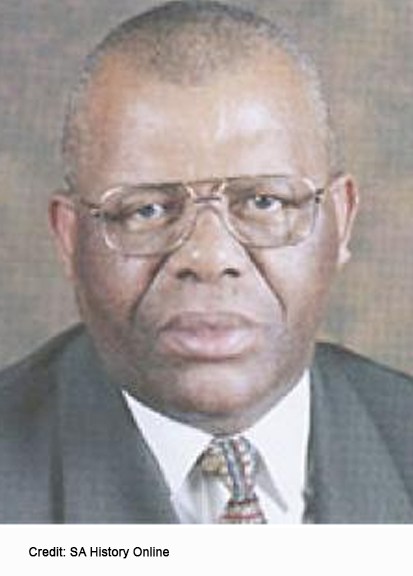 Despite South Africa being a signatory to the Geneva Convention, the prison regime was a repressive and violent one. The prison authorities set out to effect retribution against the convicted and directed their attacks against the individuality and unity of the inmates. In addition to attempting to exploit the inmates’ ideological and racial differences, contact with family and the outside world, both in correspondence and in person, were limited through extreme censorship, withholding of letters and the destruction of personal correspondence.

Inmates were further subjected to strenuous manual labour. Beyond quarrying, road and building construction, prisoners had to break stones in the courtyard. The latter activity was a meaningless and soul-destroying activity aimed at creating ‘eventless-time’. Despite this sweaty and backbreaking labour, inmates were restricted to two showers per week, three days apart.

Transgressions of any rule, both real and imagined, were punished by a denial of meals, spare diets (rice and water), corporal punishment and long periods of solitary confinement.  This was complemented by physical assaults, strip- and internal body cavity searches and routine humiliation.

The attack on the body and mind was further pursued through the denial of all forms of recreation or sport. Christo Brand, one of Nelson Mandela’s warders, noted: “They were to be physically and mentally broken as thoroughly as the limestone they were forced to hack in the quarry.” Political discipline amongst the political prisoners, however, remained high and prevented major divisions.

Fighting for their physical and psychological survival, prisoners demanded a more ‘creative’ incarceration environment in accordance with existing international protocols. They further drew on their “positive psychological capital” to disrupt the institutional status quo. Beyond demanding compliance with international protocols, especially the right to exercise, political prisoners defied the repressive rules and started to improve the psychological climate in the prison by creating a ‘surrogate world’ more conducive to their mental health.42 Without any permission, they manufactured their own games such as chess, Ludo and draughts from throwaway materials. These were soon confiscated.

In response, the inmates with the assistance of the International Red Cross (IRC) and the anti-apartheid solidarity network, resisted. They further employed work stoppages, go-slows, hunger strikes and other more subtle forms of non-compliance in order to force change during the period 1966-70.

As a result of this sustained pressure, the authorities finally relented and allowed concessions such as the formation of a Prisoners Recreation Committee (PCR) in September 1967. Inmates seized the initiative and established the Makana Football Association (MFA), a sub-structure tasked with organising football (soccer) matches between inmate teams. The MFA at its prime boasted 26 teams divided into three divisions and hosted an official competition. This set an important precedent for the birth of the Island Rugby Board.

The Robben Island Rugby Board, formally known as the Island Rugby Board (IRB) was established on 30 January 1972 with Steve Tshwete, a self-proclaimed ‘ruggerite’, as its founding president. Before his imprisonment Tshwete played his rugby under the SA African Rugby Board. As such he was acquainted with the long struggle of black rugby players for the right to represent South Africa internationally. He was also keenly aware of apartheid rugby’s longstanding special relationship with the International Rugby Board (IRB), especially the world body’s failure to condemn racism in South African rugby.

The use of the acronym “IRB” by the Islanders is an interesting one. By choosing a similar acronym as the international body, the IRB seemingly tried to communicate both a vision of equality and that of a new societal order. It further appeared as a deliberate act aimed at linking Robben Island, the freedom struggle and the longstanding campaign of black rugby administrators and players, to secure international recognition.

The IRB, from the outset, conducted its affairs based on a written constitution, properly constituted clubs, rules and regulations, decision-making structures and formal procedures such as written mandates to meetings. It further provided a framework for the election of executive committees, trustees, kit masters and the establishment of a referee’s society. The IRB also kept formal written records (both narrative and statistical), received and debated organizational reports, kept financial records, and maintained a system of approvals for expenditure. Consistent with established practices elsewhere, prison clubs had to register official colours and their playing uniforms. Given the detailed nature of its activities, guardianship and enforcement of the rules of the game, and consensus seeking decision-making which mirrored external societal structures, Liz Buntman suggested that inmates were engaging in building ‘a new polity and a nascent parliament within prison’.

During its lifetime, the IRB boasted a significant number of clubs that formed a unique and colourful rugby community. Amongst these were clubs such as iXhalanga (“Vultures”), Ikwezi (“Morning Star”), Iqala (“Beginning”), Inkonyane (“Calfs”), Makana Football Association XV, AbaThakathi XV (“The Witches”), Izanuse XV (“Healers”), Abagodukayo XV (“Those going home”), Abashiyekayo XV (“Those remaining behind”), and Pula XV (“Rain”). Affiliated clubs competed for both a League Trophy and a Knockout Shield, which were presented at an official annual awards ceremony. True to its character as an inmate body, the clubs played ad hoc games inclusive of farewell games and special challenge matches.

Club names contained embedded meanings and implicit references to  bravery, courage, speed, strategic manoeuvring and cunning,  all characteristics required for the successful waging of an armed struggle.  Amongst these were clubs such as Lions, Jackals, Wolves, Sparrows, Flyers, and Veterans. This, apparantly, was also the case with clubs that sported militaristic names such as Arsenals RFC. The  naming of one club as Kiwis RFC similarly offered interesting possibilities and identification with the New Zealand Maoris who  until 1970 were excluded from all Kiwi visiting teams to South Africa as a result of white racism. Almost from the outset of rugby contact between South Africa and New Zealand, a significant number of black South Africans strongly identified with and supported the visitors as opposed to the Springbok national team. With the release of Tshwete in March 1978, Mluleki George, a former president of the Border Rugby Union in the Eastern Cape, took over the leadership of the structure.

Tshwete’s release coincided with the formation of the SA Rugby Board, a multi-racial federal body established by the white SA Rugby Football Board, the all-Coloured SA Rugby Football Federation (SARFF) and the blacks-only SA Rugby Association. This initiative was aimed at facilitating South Africa’s return to international rugby competition. The SA Rugby Union (SARU), their ideological opponent, rejected this unity as one of convenience and not aimed at the destruction of apartheid. From the late 1970s, SARU also actively campaigned for an end to rugby tours to South Africa.

Following the protest-afflicted rugby tour of New Zealand in 1981, the global anti-apartheid movement intensified its campaigns to isolate South African rugby. As a result, New Zealand, Wales and France cancelled their scheduled visits to the country. Confronted by increasing isolation, the SARB realised that rugby needed a political solution. This started four years of negotiation with, amongst others, the exiled African National Congress. Central within this process was Steve Tshwete.

The search for a political solution led the SARB to join discussions between the exiled ANC and a group of white South African opinion formers under the umbrella of the Institute for Democratic Alternatives in South Africa (IDASA) in Dakar, Senegal, during July 1987. During that process, some participants suggested the use of sport as a mechanism to facilitate political change. When the apartheid government summarily rejected the idea, the white rugby fraternity embarked on its own journey to resolve the impasse.

Aided by a number of intermediaries, the SARB, in direct conflict with official government policy, secretly met the ANC in various European cities during 1988. When these meetings became public knowledge, the SARB was roundly condemned as traitors by elements within the political establishment. Undeterred, the organisation persisted in its endeavours. Through ANC intervention it finally succeeded and secured an engagement with its rival, the SA Rugby Union, in October in Harare, Zimbabwe.  The SA Rugby Union was represented by Ebrahim Patel and Ismail Jakoet whilst the ANC delegation consisted of Thabo Mbeki, Barbara Masekela, Steve Tshwete and Alfred Nzo. The latter chaired proceedings. At the end of the two-day session, the parties issued a statement of intent committing them to work towards the establishment of a single, non-racial rugby body. The decision to create a non-racial rugby body generated a ‘fire-storm’ according to Louis Luyt, the SARB’s chief negotiator. Although the majority of its affiliates endorsed the decision and mandated Craven to ‘vigorously’ pursuit unity and to integrate the sport, two rural unions refused to support the leadership. They also rejected any association with the banned movement.

Opposition also emerged within the ranks of the non-racial sporting fraternity under the umbrella of the SA Council on Sport (SACOS). Opponents of the decision accused the SA Rugby Union of unprincipled behaviour and for giving credibility to the racist sports fraternity. SACOS further rejected the unity deal as predetermined and “tantamount to blackmail” and prohibited its affiliates from participating in unity talks. Given the growing unhappiness despite the political value of the initiative, especially its potential to buy goodwill amongst the white population, the politicians took charge of the processes. Whilst the SA Rugby Union was still debating unity within its own ranks, the ANC in London formally communicated the decision to the International Rugby Board and SANROC to unify. This was aimed at preventing any opportunistic undermining of the process. This coincided with  the unbanning of political organisations and the release of political prisoners in 1990, which gave further moment to the process.

Given the complexities of race and the long history of apartheid, the rugby unity talks soon deadlocked.  This prompted the SARU to request political intervention from Mandela and Steve Tshwete in September 1991.  The duo, in addition to reiterating the importance of sport for the transition process,  encouraged the leadership to  strive towards the achievement of “a true and realistic unity” with due consideration to the “positive effects such a unity could  have on the socio-political life of the country”. After this intervention Mandela handed the facilitator’s chair to Tshwete who stayed with the process until January 1992.  Mandela, however, remained in contact with the unfolding process until the coordinating committee’s last meeting whereafter the process was handed back to the rugby administrators.

On 20 March 1992, the new SA Rugby Football Union (SARFU) was established, ending almost a century of racism in the  sport. The merging parties, SARB and SARU, further embarked on a two-year transitional period. During the organisation’s first democratic elections in March 1994, Mluleki George was elected as the new Senior Deputy President of the unified body as an understudy to Louis Luyt. Both committed to tackle the twin-challenge of developing the game to the benefit of all and to create a new generation of rugby heroes. In April following the country’s first non-racial elections, Tshwete became the Minister of Sports in Nelson Mandela’s cabinet.

Boxes 1 and 5: General Sports and Recreation Committee, Mayibuye Centre for History and Culture in South Africa, University of the Western Cape, Bellville, SA.

F. Buntman, “Continuing and Extending Resistance and Struggle: The Role of Robben Island, 1963–1976,” Seminar Paper No. 369, presented on October 17, 1994 at the Institute for Advanced Social Research, University of the Witwatersrand, Johannesburg.

W.F. Cascio and F. Luthans, “Reﬂections on the Metamorphosis at Robben Island: The Role of Institutional Work and Positive Psychological Capital,” Journal of Management Inquiry 23, no. 1 (2013). 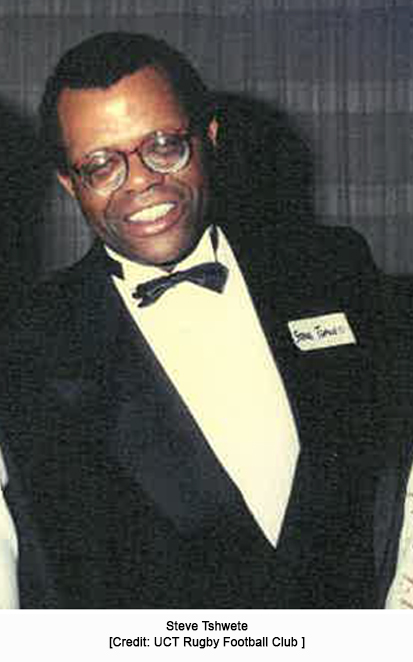 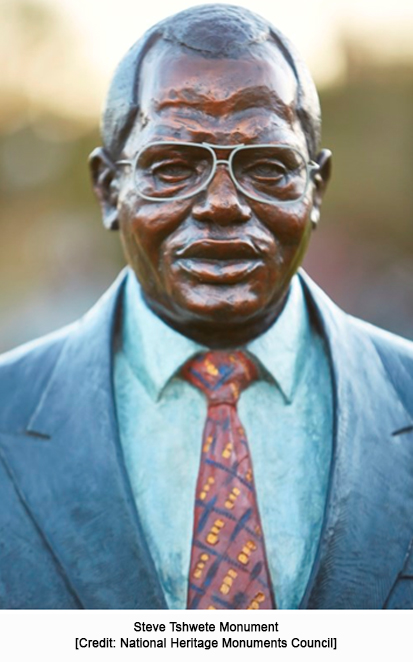 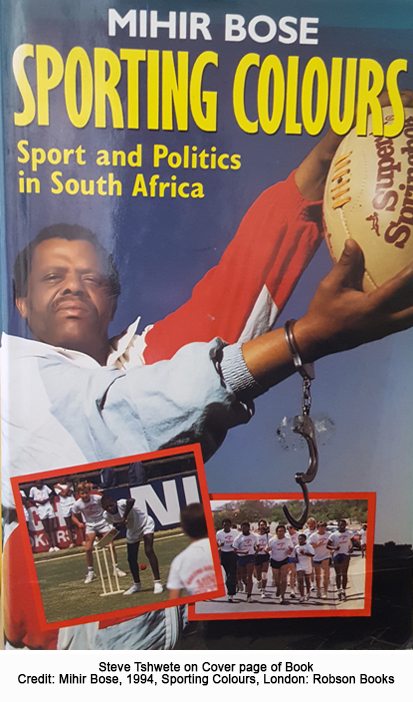