Going back in time to 252 million years ago, before the evolution of dinosaurs, birds, and mammals,the South African Karoo (Figure 1) looked very different from how it does today. Mississippi-sized rivers bordered by massive floodplains and lush vegetation traversed the land. Amongst the trees and bushes lived a special group of animals called therapsids. They are special to us because they are the forerunners of mammals and soalso our long lost ancestors. They came in all shapes and sizes from tiny insectivores to massive herbivores and even sabre-toothed carnivores.

However, something changed at this time; a global event that was to change both the land and marine ecosystems forever. The event that took place was the end-Permian mass extinction. There have been five major mass extinctions in Earth’s history, but the end-Permian was by far the most catastrophic (Figure 2). It caused about 90% of all marine and 70% of all land species to become extinct, and nearly wiped out the therapsids, our ancestors. Many scientists have spent decades studying this event to find out why, how, and what effect it had on Earth’s ecosystems. There have been several theories ranging from too little oxygen or too much methane gas in the sea, to meteorites. Another theory was Pangaea itself. Pangaea is the name given to the super continent that was present on one side of the globe 252 million years ago. All the continents were joined together as one, which caused the inner part of the continent to become very hot and dry and ultimately led to severe drought. It also would have disrupted the ocean currents and affected marine ecosystems.

As more research has been conducted, however, it seems the most likely culprit for the cause of the end-Permian mass extinction is the Siberian Traps in Russia. The Siberian Traps is a vast area covered by volcanic rocks and tells the story of long-ago volcanic eruptions that caused a global catastrophe some 252 million years ago. The immediate area would have been affected by lava and pyroclastic flows. Sulphur and volcanic ash would have entered the atmosphere, blocking out the sunlight. Greenhouse gases such as carbon dioxide, methane, and water vapour would have caused an overall increase in temperature by allowing sunlight to pass through, but not allowing heat to dissipate. This effect can last for millions of years. The ozone layer would also have been destroyed by gases such as chlorine and fluorine, allowing harmful ultraviolet rays to penetrate to the earth’s surface.

The largest eruption in historical memory was in Iceland between 1783 and 1784 and it released about 12 km3 of lava onto the island and increased the global temperature by 1°C. Another volcanic eruption that formed Lake Toba in Indonesia about 75 000 years ago released about 2000 km3 of magma in a single pyroclastic eruption and it caused a 5°C increase in global temperature. The Siberian Traps released 3 million km3 of magma and associated gases into the atmosphere. Can you imagine what the increase in global temperature would have been and what effect this would have had on the plants and animals living at the time?

Whatever the cause, it is clear from fossil evidence that the end-Permian mass extinction was the most dramatic in Earth’s history. It caused most of the therapsids to become extinct, including huge herbivores and carnivores. However, one therapsid that not only survived the event but became very abundant during the post-extinction phase, was the dicynodont,Lystrosaurus. Lystrosaurus was a short, dumpy, medium-sized (up to about 1.5 metres in length) herbivore that thrived after the mass extinction phase (Figure 3). Many scientists have studied this interesting animal to find out why it not only survived, but was so abundant when so many other creatures around it were going extinct. There are several theories such as its ability to burrow or how it reproduced. The environment in which Lystrosaurus lived was hot and dry, susceptible to unpredictable flooding followed by long periods of drought. Scientists think that Lystrosaurus’ ability to burrow allowed it to escape the harsh conditions in which it lived. It was also able to breed at young ages and although many young died (as seen by the many fossil babies found in the Karoo), the number of young Lystrosaurus produced outweighed the number that died.

It is important to study the creatures that lived after a mass extinction. Knowing how and why certain species survive while others become extinct helps us to understand the dynamics of today’s extinction, in what has been termed the 6th mass extinction. Scientists have learned from research on Lystrosaurus that generalists (organisms not limited to one food source) are more likely to adapt to a changing environment and thus survive, compared to a specialist that relies on one food source. One of the leading causes for today’s mass extinction is carbon emissions, very similar to what occurred during the end-Permian mass extinction, showing just how important it is to study past extinctions. 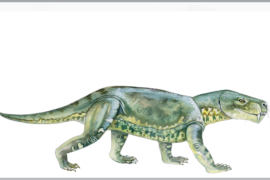 Our ancient ancestors the Therapsida 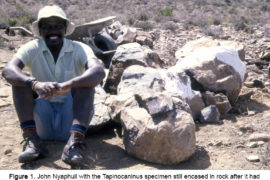 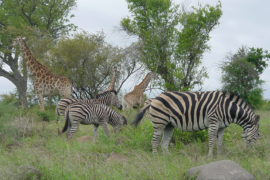 The Peculiar Diversity of Mammal Herbivores